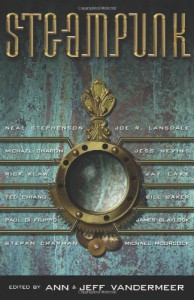 Average of 2.68 stars for all the items rounds up to 3, I suppose.
Overall, rather disappointing. There are two truly excellent stories; I'd read them both before.

** Benediction - Michael Moorcock. A quite random and inconclusive excerpt from the novel 'The Warlord of the Air.' Read the book instead. (or, possibly, the whole trilogy.)

** Lord Kelvin's Machine - James P. Blaylock. A stilted, faux-19th century writing style and a strange lack of tension make this tale strangely boring. Various characters are scheming to destroy and/or save the earth (by pushing us into the path of an asteroid, or not), but I could not bring myself to care about the planet's fate.

*** The Giving Mouth - Ian R. Macleod. Loved the setting and characters. The details were brilliantly, grotesquely original. The setup was great, working both as story and allegory, as an abused lord's son in a medieval-ish mining town seeks to come to terms with the empty, horrific world he sees around him and find meaning & beauty in life. However, the resolution didn't really come together for me.

*****A Sun in the Attic - Mary Gentle. A re-read. (It's in the Gentle collection 'Cartomancy.')I love this story. Both heartbreaking and satisfying, it challenges social expectations, portrays emotional conflicts that ring true, and creates one of the best scenarios I've ever read about intentionally turning away from technology and what technology brings with it.

*** The God-Clown is Near - Jay Lake. A couple of thugs pressure a man to create a bio-engineered golem to their specifications. The world is effectively horrific and filled with grotesquerie and depravation... but the plot was slight, and I felt like it was just going out of its way to be gratuitously shocking.

*** The Selene Gardening Society - Molly Brown. A women's group decided to terraform the moon by sending our compostable garbage there. Mildly amusing.

*****Seventy-Two Letters - Ted Chiang. A re-read (included in his collection, Stories of Your Life and Others.) Ted Chiang is freakin' brilliant. However, this isn't steampunk at all, but idea-based, blow-your-mind science fiction. However, I have no objection to it being in this book, because the more people that read Chiang, the better. I'd be in favor of a proposal to add a Chiang story into every published anthology... romance, chicken-soup stories, sports fiction... you name it, stick in a Chiang. Fine, this does have a 19th-century setting and golems... but still.

*** The Martian Agent, A Planetary Romance - Michael Chabon. Like everything Michael Chabon puts out, this is brilliantly written, with spare, effective characterization and emotional drama that sucks you straight in... but this tale of two boys on an alt-history American Frontier, dragged into their parents' politics, cries out to be expanded into a novel. It doesn't feel like a complete work.

*** Victoria - Paul di Filippo. From the description I'd read of this story ("Queen Victoria is replaced by a newt.") I expected to hate it. However, it was actually fairly amusing.

*** Reflected Light - Rachel Pollock. Not bad. This story also has an 'unfinished' feel, but in this case, I think it works. Told in fragments, allegedly found on decaying wax cylinder recordings, it relates a factory worker's feelings of friendship and guilt regarding a missing co-worker. It speaks eloquently of the many 'lost voices' of history.

** Minutes of the Last Meeting - Stepan Chapman. An alternate history version of what happened to the last Tsar in 1918. Here, it wasn't just the end a family, but the end of much more. There are some good ideas here, but it gets a little muddled, as the author tries to jam a glut of elements into 30 pages.

*** Excerpt from the Third and Last Volume of Tribes of the Pacific Coast - Neal Stephenson. This one isn't actually an excerpt. (or steampunk, at all.) It's a story about future anthropologists being holed up in a glass elevator waiting for savage local tribes to attack. The story (written in 1995) presciently discussed the practical and ethical issues we're now facing regarding 3-D printers and their capabilities.

* The Steam Driven Time Machine: A Pop Culture Survey - Rick Klaw. This reads like it was written by someone with a very unclear idea of what steampunk actually is, who did a google search.

* The Essential Sequential Steampunk: A Modest Survey of the Genre Within the Comic Book Medium - Bill Baker. This author describes the plots of some comic books. I skimmed it - boring.
Tweet