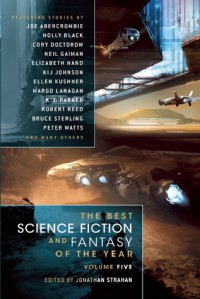 As with any anthology, there were stories I loved and stories I really didn't like. Overall, I thought it started weaker than I expected, but by the the time I was done, it had won me over.

It includes:
“Elegy for a Young Elk” by Hannu Rajaniemi. I recently read his acclaimed 'Quantum Thief' and didn't love it. This story was better, but still didn't win me over. Although it was full of interesting and bizarre imagery, the story didn't really go anywhere, or seem to have a point to make.

“The Truth is a Cave in the Black Mountains,” by Neil Gaiman. Loved, loved, loved it. I think this is one of the most powerful, mature pieces Gaiman's written - and I like Gaiman rather a lot. A story of revenge with the feeling of a classic folk tale.

“Seven Sexy Cowboy Robots” by Sandra McDonald. It didn't do it for me. I just don't really like this type of absurdist writing. ’

“The Spy Who Never Grew Up” by Sarah Reese Brennan. Really disliked it. I recently read a feminist take on Peter Pan by Pat Cadigan that I thought was quite good, but this was not for me.

“The Aarne-Thompson Classification Revue” by Holly Black. I liked this story, though the themes were very YA. (A werewolf girl must accept herself for who she is and learn to shine as an individual.) Not sure I'd classify it as a 'best of the best,' but it was enjoyable.

“The Fool Jobs” by Joe Abercrombie. I was interested to read this, because I've heard good things about Abercrombie's novels, which I haven't gotten to reading yet. This piece seemed more like a snippet from a novel rather than a complete story. Rough fantasy mercenaries.

“Alone” by Robert Reed. The story of a little machine wandering across the face of a gigantic spaceship for millennia. That might sound a little boring, but it's not. I really liked it. Apparently the world this is set in is the setting of a dozen or so novels, which I haven't read.

“Names for Water” by Kij Johnson. Another story with a YA feel. A mysterious (crank?) phone call inspires a young woman in her career choice. All right, but not remarkable.

“Fair Ladies” by Theodora Goss. Loved it. This story made me realize that I really need to get Goss' book of short stories. This is a strong, beautiful, insightful and tragic tale of the fae.

“Plus or Minus” by James P. Kelly. Good, but not great. Apparently, this is a sequel, so perhaps if I'd read the previous story, I'd like it a little more. A rag-tag bunch of spacefarers encounter trouble, and must rise to the occasion. I didn't really see the conclusion coming.

“The Man with the Knives” by Ellen Kushner. Loved it. But then, I love her Riverside books. You should have read those, and be familiar with the characters, to really appreciate this story.

“The Jammie Dodgers and the Adventure of the Leicester Square Screening” by Cory Doctorow. Loved it. A tale of disenfranchised youth with a cyberpunk-y feel. It's a 'small' story, about a minor accomplishment - but the emotional impact is far from small.

“The Maiden Flight of McAuley’s Bellerophon” by Elizabeth Hand. I've read most of Elizabeth Hand’s work, and I usually almost love it - but with reservations. No reservations here. This is a beautiful, mysterious, weird and wonderful story. If you like archives, history, the early days of flight and innovation... check it out.

“The Miracle Aquilina” by Margo Lanagan. A strong feminist tale about martyrdom and a woman's strength.

“The Taste of Night” by Pat Cadigan. I wouldn't call this a science-fiction story at all. But it is a touching and horrific depiction of the ravages of a medical anomaly.

“The Exterminator’s Want-Ad” by Bruce Sterling. A funny, ironic story of after the revolution... I enjoyed it, but I wouldn't say it is one of Sterling's major works.

“Map of Seventeen” by Christopher Barzak. A teenage girl's gay brother comes back to his small town to live... with his new boyfriend. But although they're not hiding that they're gay, the boyfriend has a bigger secret... A sweet and magical story.

“The Naturalist” by Maureen F. McHugh. I've loved everything that McHugh has ever published, and this is no exception. A good, nasty zombie story, with shades of 'Escape From New York.'

“Sins of the Father” by Sara Genge. An original take on "The Little Mermaid" type of story. Equally tragic, although in a very different way.

“The Sultan of the Clouds” by Geoffrey A. Landis. Maybe it's just the combination of the title and the author's name, but I just couldn't help thinking of Lando Calrissian and Cloud City while reading this. There are other parallels as well... A short adventure that I felt might work better as a novel than a short story.

“Iteration” by John Kessel. What if you could change just one thing about the world, every day? In this story, the results are somewhat vague and disorienting.

“The Care and Feeding of Your Baby Killer Unicorn” by Diana Peterfreund. A really good story, although I didn't really think it was necessary that the dangerous, predatory creatures were unicorns. YA themse again, about pursuing a path that is neither what family or society picks out for you... but done very well.

“Still Life (A Sexagesimal Fairy Tale)” by Ian Tregillis. In a land without time, a clockmaker messes with things in order to try to win the man she loves. Some nice ideas and imagery, but I was completely unconvinced that the character, as she was portrayed, would sacrifice herself for this guy.

“The Things” by Peter Watts. Interesting story from the perspective of a Borg-like alien who doesn't comprehend the idea of individual consciousness. Good, but I found the first-person narration to be somewhat awkward and inconsistent with the perspective of the character.

“The Zeppelin Conductor’s Society Annual Gentleman’s Ball” by Genevieve Valentine. (Is that a real name for a steampunk author? I have my doubts.) Well, it is critical of the society that it creates, as so much steampunk is. It's tragic, grotesque, and intentionally bizarre. But I didn't love it.

“The Lady Who Plucked Red Flowers Beneath the Queen’s Window” by Rachel Swirsky. The spirit of a powerful woman is called into service by many sorcerers, throughout the ages. However, regardless of her experiences, she is unable to transcend the prejudices of her youth. Nice, well-realized story.
Tweet