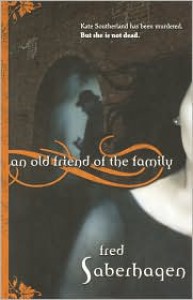 The book cover says this is "Saberhagen's first vampire novel," Goodreads says it's #3 in a series.
It appears to work as a standalone.

I've previously read most of Saberhagen's 'swords' series; I believe this is the first I've read by him that isn't part of that series. However, it's pretty much what I expected - an easy, quick-moving, entertaining read without too much depth or complexity to it.

Set in the 70's (it was published in 1979, so it was meant to be contemporary, but the setting is so strongly 70's it feels like a period piece), a group of vampires decide to destroy an innocent family.

The teenage daughter is murdered; the teenage son is kidnapped. In desperation, the mother of the family conducts an old family ritual - surely just superstition? But soon, a kindly old doctor arrives to help. As this is the 'Dracula' series, it's not a spoiler to say that the doctor, who introduces himself as an old family friend, is actually Dracula.
Tweet