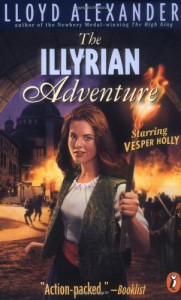 A short, quick teen adventure from Alexander. Fun, but light, and not as good as the other book I've read from Alexander recently (The Rope Trick). "Illyria" is an old name for the area that now includes Croatia, where I was this spring (and which I'm still editing/uploading my photos from!), but I have to say i didn't get a very specific sense of place from the book. It's more of a fantasy-feeling country, although it's a historical adventure, not a fantasy one. Set in the 19th century, it has to do with a ridiculously self-sufficient and resourceful orphan, Vesper Holly (female and redheaded of course, I think Alexander's got a thing for them). Her new 'guardian', an elderly man who was a friend of her late father's, is quite overwhelmed by her, and is helpless in the wake of Vesper's headstrong notions, which involve running off to Illyria to investigate a theory of her father's, and result in both getting caught up in a political struggle between rebels and a clueless king. The interactions between Vesper and her guardian are quite funny, but the political situation is rather grotesquely simplified (and too easily fixed), considering the actual history of the region. Enjoyable, but I'm not rushing out to get the rest of this series.