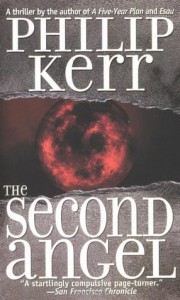 This book has been hyped as being like Michael Crichton in style.
I can see that - it's a near-future medical/heist/cyber/murder thriller that relies heavily on the author's 'scientific' theories.
However, where Crichton interviews scientists, and then ignores what they tell him (either to make a good story or to further his own political agenda, depending on who you believe... see:
http://www.realclimate.org/index.php?p=74#more-74 ) it seems that Kerr hasn't bothered to actually talk to any scientists at all, instead making it all up as he goes along.
I'm not going to get into all the scientific and medical inaccuracies of the book - if you're interested, a doctor reviewed it on amazon.com, and caught many more of the problems than I did. If such things bother you, this book is not for you.

At the outset of the book, in 2069, our protagonist, Dallas, is a successful, wealthy executive. He and his family are free of the P2 virus, a blood disease that most of the world's population has. P2 can be cured by a full blood transfer, replacing the body's blood with healthy blood. Healthy blood transfusions can also help one live longer. Unfortunately, this situation has made blood the new 'gold standard' of civilization, artificially raising prices so that only the very wealthy can afford such treatments.

It's just Dallas' bad luck that his daughter turns out to have an unrelated, genetic blood disease that will require her to have repeated blood transfers if she is to live. When his corporation finds out the situation he's facing (potential bankruptcy and desperation from paying for blood for his daughter), they no longer trust him, and decide to have him and his family assassinated. His wife and child are killed, but the assassin misses him.
Angry and without a job, Dallas decides to turn to a life of crime, and makes plans to rob the world's largest blood bank (actually, it's on the Moon).

Most of the book concentrates on this heist (aided by virtual reality sims. )
Not much energy is devoted to Dallas' loss of his family; it's just an excuse to get into the action.

Kerr obviously intends a deep musing on the powerful symbolism of blood, and so we don't miss that, he introduces a 'narrator' device which keeps popping up (in italics) to comment on the action or insert (totally unnecessary) footnotes. Some people might find this clever or fun, I just thought it interrupted and detracted from the story. The 'identity' of the narrator is also supposed to be a secret/surprise, but I figured most of it out pretty early on.

I'd previously read the omnibus edition of 3 of Kerr's crime/mystery novels, Berlin Noir, and was much more favorably impressed by those. Science-based SF just isn't this author's forte, in my opinion.
Tweet