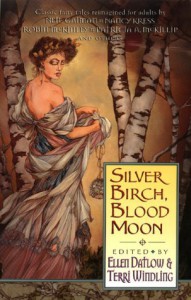 One of Datlow & Windling's excellent series of anthologies of retold/reimagined fairy tales. Terri Windling's one of the only people I've ever written out & out fan mail to - - I'm just that totally in favor of everything she's worked to espouse in literature...
if you haven't seen her website, check it out! : http://www.endicott-studio.com/

Contents of the book are:

Lee's take on the story of The Frog Prince is at first droll, but later melancholy, as it shows how one doesn't always appreciate what one has until it is gone... As usual, beautiful and effective writing from Lee.

A poem which gives the reader a different (feminist) take on the motivations of the fairy whose christening "gift" to Sleeping Beauty was perceived as a curse.

Briggs here transforms the tale of Rumplestiltskin into a romance... the strange-looking but not-unattractive title character uses his magic to try to save the young weaver he loves from the threats of the vicious king... updates the story while staying true to the 'soul' of the genre... very nice! I'll be looking up other work by this author!

A contemporary story of a group of young junkies trying to get by, living in a junkyard, and the itinerant drug-dealer boyfriend of one... Only indirectly inspired by the Sleeping Beauty and Snow White tales - fans of Kiernan will likely love this story; fans of fairy tales may not.

A weird and rather grotesque tale of a parlor-trick-type magician whose unloved assistant/wife is offered a chance to escape into another land through a secret passage in her trick cabinet... reminded me of Jonathan Carroll (whom I'm not personally a fan of).

The Emperor's New Clothes - reimagined as a rather ill-conceived political plot that backfires on an embarrassed prince. A character study of a not-too-savvy individual!

Having rubies and diamonds fall from one's mouth at every word isn't necessarily all that fun. As a matter of fact, it's driven the woman in this story away from her abusive husband, who regards her only as a source of riches - and driven her into self-imposed silence - until she finds a way to use her gift/curse to solve both issues at once...

In this version of The Little Mermaid, the main difference is that the undersea witch who performs the transforming magic for the mermaid is actually loving, not evil. It's the mermaid's father who turns out to be the bad guy. Shaw gives her mermaid a happy ending - but does it in a much more touching and romantic manner than the Disney version.

When a middle-aged spinster wakes from a nap by the lake to find a young and beautiful naked man lying by her side, she finds she's pretty easily seduced... but a young lover who used to be a frog may have some rather unusual qualities....

* 132 • The Dybbuk in the Bottle • Russell William Asplund

When a poor Jewish farmer with dreams of grandeur finds a magical bottle, complete with 'genie,' of course he thinks he can use this spirit's powers to make himself great and renowned as the famous rabbis of yore... but soon the dybbuk has him in such a state, due to his twisting around of wishes, that he needs to seek out his own rabbi for help.
The story is both funny and touching, with the feel of an actual traditional tale from the Jewish tradition...

When a lonely woman receives the only offer of marriage she's ever had, she commits to her new husband totally, willing to sacrifice nearly everything to make him happy and do as he wishes. In her love, she is blind to the fact that the poor fisherman she has tied herself to is a proud, cruel and indifferent man. It takes her only friend to show her that her husband did not merely lose, but actively stole and hid that which was most valuable to her, in an attempt to totally control her.
Although this is definitely a 'story with a message' about abusive relationships, it's written with subtlety and sensitivity, and rises above its agenda.

A rather horrible (as in horrific, not 'bad') story of Thumbelina.... narrated by a man who bought Thumbelina from her mother as a curiosity, and imprisoned her in a gilded cage - with no comprehension of why she tried to escape (with tragic result).

A retelling of Sleeping Beauty where the wall of thorns springs up as a protective reaction to the princess' rape by her mother's lover, and the resolution is that the princess, in order to be 'rescued,' must heal enough to rejoin with herself, not to be joined with a prince. Shares a lot, thematically, with her later Black Jewels trilogy. (Bishop was 'discovered' through her contributions to this series.)

A gorily disturbing story of the mothers and families of princes caught in the legendary wall of thorns trying to prolong the lives of their loved ones, no matter what. A comment on the unhealthy aspects of motherly love? A statement about vain suffering? I'm not sure...

Very much a feel-good story about a young girl in a modern Islamic kingdom, where the king is marrying a different young, intelligent girl every week or so... and none of the brides have been seen again. However, their fate may be just slightly different than in the traditional stories of this ilk you may have heard... A bit of wishful thinking in this one, but's it's still enjoyable.

Another story of the two sisters, one who has jewels spurt out of her mouth at every word, the other who has 'vermin' emit with her emissions... This one makes the point that rare spiders and reptiles may be more valuable in the long run than opals and pearls.

Here, the story of Beauty & the Beast is transposed into a tale of Haitian voodoo, when a Catholic girl leaves her poverty-stricken family to marry a rich but strange-looking and mysterious gentleman. Perhaps not culturally accurate, but a richly flavored and colorful story.

A social worker is briefly drawn into the life of a young girl obsessed with fairy tales who has murdered her foster mother. It reminds her uncomfortably of her loss of her own delinquent daughter.

A short poem about telling his daughter the story of Goldilocks.

A traditional but original fantasy of a kingdom where, generations ago, the royalty made a bargain with the fey and mysterious marsh-folk, seemingly to the benefit of both - each king will marry a marsh-woman, and in return the marsh folk will live in their own ways, without oppression or interference. But, twenty generations down the road, a bold young woman discovers that there are darker aspects to this mage-enforced bargain than either side suspected...

McKillip is one of my favorite authors, but this short musing on the story of the frog prince, while interesting, is not one of her most amazing works.
Tweet